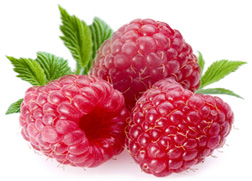 Raspberries are a Serbian national brand. The favourable climate and good geographical position of the country enable exceptional quality of raspberries, which makes it one of the most important export products of Serbia, while Serbia has become one of the leading exporters of fresh and frozen raspberries in the world.

The raspberry is a shrub native to South East Europe, a highly regarded plant, at first because of its irresistible appearance, taste and aroma and then because of its medicinal properties.

The raspberry is a source of Vitamin C and it also contains vitamins of B complex, E and K, and almost all minerals. In terms of nutritional value, raspberries are particularly interesting because of the rich content of various antioxidants, whereas the antioxidant activity is not lost when the raspberries are frozen. It is used fresh and deep frozen in the food industry.

Raspberries from Serbia are characterized by a high percentage of dry matter of 8-14%, which indicates the multiple advantages in quality, use and technological value of the fruit. The most prevalent raspberry variety in Serbia is Willamette, which is characterized by its exceptional taste and dark red colour even after deep freezing. The Miker variety is also highly sought after.